If you are over the age of 30 and if you were awake on 9.11.01, you can probably pinpoint where you were on that awful day.  You might also be able to point to certain actions in your life that are a direct result of what happened to you and how you felt in the wake of 9-11.  A lot of us shifted or changed course entirely on that day.  I can honestly say that my journey to becoming an entrepreneur, and subsequently a pregnant entrepreneur, started that day.

That day I decided that my north Jersey work location was too close to New York, that I really was doing a thankless job that would not leave the world better, and that maybe it was time to possibly think about perhaps considering to start a family that had more two-footed people in it, and not just four-footed children.  I started prioritizing differently. 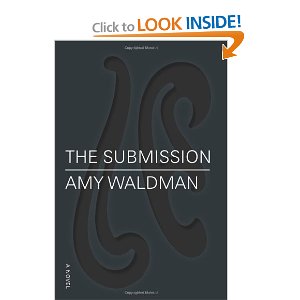 I hadn’t really thought about reading a fictional account of the events until I heard about The Submission by Amy Waldman.  The book is superb and worth a read.  For a first novel, she really tackles a big topic.  The book starts two years after the attacks and follows a handful of families on all sides of the issues surrounding a monument being chosen to stand at Ground Zero.  When the architect of the monument surfaces as a muslim, albeit a non-practicing one, the firestorm starts. The characters are very believable, mirroring actual politcal figures.  Event the event could have been inspired by the real life group who wanted to build a mosque close to the site.

What kept me reading was the desire to see America turn out OK.  I wanted to know that people could work through their fear, distrust and ignorance to arrive at the America that we imagine we are.  The America who accepts the poor and tired teaming on her shores.  The America who prizes religious freedom for all, not just those who sit beside us in church.  Ms. Waldman does a wonderful job of developing the situation into the complex, messy situation that it is.  The champions change course.  The downtrodden really does have an agenda, even if he doesn’t know it.  The spokesperson for the issue, who has influence she never intended, is someone that no one at all elected.  In the end, success comes despite the turmoil, but not in a satisfactory way.

I wanted to see America turn out OK.  I’m still not sure if it did.  But I’m sure that those who are earnest enough to read this book are the same people who will be thoughtful about how they spend their time, what they do to shape their family, and how they think about the dark-skinned person standing next to them at the airport next time.

If you still have time for a fictional read, The Submission is a good pick.